It’s been a week and a half since DragonCon 2014, and I admit that I’ve been so busy since then that I’ve hardly had time to fall into Post Con Depression. To help keep it at bay a little longer, I thought I’d get the highlights of my weekend written down before it all becomes one big costumed blur. As usual, I kicked off the party a little early. DragonCon doesn’t start until the Friday before Labor Day, but on Wednesday night I put on my AT-AT poodle skirt and saddle shoes for a pre-party at Big Kahuna. It was a great night – not only did I see a lot of the usual suspects, but I also got to catch up with people who I only see at DragonCon or, in the case of Lonewolf Customs’s John Ficker, people who moved out of Georgia without asking our permission first (we would have said “no”).

I had to work on Thursday, but I did take a long enough break to go pick up badges for myself and my family. In years past, the line alone would have taken at least three hours. This year, from the time I left my house to the time I got home again, was one hour. Chris Uno and I high-fived with joy at getting through registration in under ten minutes. Bravo to the DragonCon staff for an outstanding job and a great new system!

I picked up my mom and my aunt on Thursday afternoon, and off we went to the Marriott so I could drop them off. Rush hour traffic + DragonCon = gridlock. We crawled along for hours, but finally I got them checked into the hotel and made my (very slow) way home. I came back to the Marriott that evening, where I got lots of compliments on my Abby costume – even though I was in jeans and a tee-shirt. I ran into another Sherlock!

Friday was Sherlock day, so I was a wee bit warm in my wool coat and black suit, but I persevered. The highlight of the day was the Karl Urban panel. I’m so glad he finally came to DragonCon! I’m a huge Lord of the Rings fan, and he is fantastic as Eomer. That evening, I sat on my first of two Supernatural fan panels. It’s the first time I’ve gotten to be on a panel at DragonCon, so a big thanks goes out to Urban Fantasy Track Director Carol Malcolm for inviting me to participate.

On Saturday, I put on my Abby costume, including the massive goth boots I finally bought to go with the ensemble. We arrived downtown at 9am, an hour before the parade, and although we found parking easily, the sidewalks were already packed with people. Wow! The parade is always crowded, but people are definitely arriving earlier than in previous years. We lucked out and got a spot on the steps in front of the Marriott, so we had a clear view over all of the heads. With the fabulous Darth Cleavage as Lady Loki.

After the parade, we went to the John Ratzenberger panel, which was really entertaining and a lot of fun. That night was the mixer for the 501st and Rebel Legions followed by the Last Party on Alderaan. So much Star Wars fun with my friends!

Sunday was absolutely my favorite day. For one thing, it felt really good to be dressed up as Eowyn from The Lord of the Rings. I love her character, and from the comments I heard throughout the day, a lot of other women feel the same way. Mom and Aunt Bonnie were hobbits, so we were quite the Middle Earth gang.

The Tolkien panel was first up. We had seen Billy Boyd and Craig Parker before, but it was our first time getting to see Jed Brophy and Adam Brown in a panel. The highlight was hearing Billy Boyd sing Pippin’s song from Return of the King. It was perfect. I ran into Gandalf!

I had to leave the panel early to line up for my photo opp with Karl Urban. Eowyn and Eomer, together again! Well, kind of. Now, I’ve met my fair share of celebrities, and I pride myself on not getting all tongue-tied and starry-eyed. But when I walked up for my picture, Karl looked me in the eyes and said, “Hi, gorgeous, how’s it going?” in that Kiwi accent of his, and something in my brain broke. I said “hi” and “thank you” and managed to smile for the picture, but I definitely got star-struck.

Our next panel was Warehouse 13, which included all of the Warehouse agents. It was really cool seeing all of them together onstage, and the way they acted and spoke, it felt like the audience was being allowed to spy on a private conversation among friends. I enjoy seeing that kind of interaction during panels. Yes, that blurry cheerleader is Osric Chau, who played Kevin Tran on Supernatural.

That evening was my second and final Supernatural fan panel. We had a packed house and a rousing discussion of characters. There was a guy on the front row wearing a girl’s cheerleader outfit and a mask, and it wasn’t until the very end when he took off the mask that we realized it was Osric Chau, who played Kevin Tran on the show! The whole room went nuts. I talked to him afterward and he gave me a big hug. What a great surprise for our panel!

Sunday night eventually turned into Monday morning, and soon it was time for the 1:30 a.m. Cruxshadows show. They played for almost two hours, and the couple of times that Rogue came out into the audience, it was really close to me. A fantastic show as always, and I left feeling like I could conquer the world. Rogue from The Cruxshadows singing “Angelus Everlasting” from the audience.

Monday was a quieter day: 501st Legion table duty and a cruise through the artist and vendor areas with Ed and Chris. On our way out of the show, Chris suggested that we pop into the Walk of Fame one last time, just to see which celebrities were still there. Colin Baker was, and I heard later that he stayed until the end to make sure that even the last-minute fans got to meet him.

Eddie McClintock from Warehouse 13 was there, too. He came out from behind his table, gave us all a hug, and chatted with us for about five minutes. It was the perfect way to end DragonCon 2014. 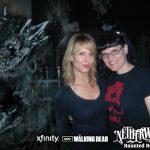 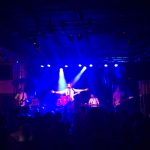