Please welcome the lovely and talented Kimber McDermott to my Paranormal Investigator Profile series! I had the pleasure of meeting Kimber not through ghost hunting, but through a Guinness World Record attempt of the most people dancing to Thriller. Kimber was a co-organizer of the attempt during Dragon*Con. We didn’t get the record, but 903 of us had a blast busting out our creepiest moves!

Where do you live?
Outside of Savannah, GA

To what investigation teams do you belong?
I belonged to Historic Ghost Watch Investigation.

What made you want to be a paranormal investigator?
I was curious to see if there was anything to ghosts, and I figured being part of a team was my best bet in finding out.  Was I ever right!

When was your first investigation, and what was it like?
My first investigation was in March of 2004 or 2005 at a location known as Hell’s Church in Canton, GA.  It’s actually the New Hightower Baptist Church, and it sits at the end of a very long, very rural road.  A small cemetery fills the area around the building.  Although there really isn’t much that might be paranormal about the area, it became rather infamous for being a church that was burned to the ground because supposed Satan worshipers used the area for rituals.  Three teens threw firebombs at the church in 1990 for revenge on the man that killed one of the young men’s father 15 years before.  The murderer had no ties to the church, but the young man thought the killer was a Satan worshiper and that burning the site of other worshipers would bring revenge for the death.  A bit of a stretch on logic.

Nothing phenomenal happened except the appearance of a small, blue orb that was probably caused by the security light around the church, and a police officer that visited mentioned that a young woman supposedly hanged herself years before in the cemetery.

What is your most memorable investigation so far?
We did the Military Hospital down in St. Augustine, and that was probably the most active for me.  It’s very hard to describe what happened, but two different spirits came to me in a very strong way.  The first one was the closest to evil as I can describe since I really don’t like using that word when talking about spirits.  It makes people think of demons (which I don’t believe exist).  When I walked into the room a blackness engulfed me and I felt as if I were being assaulted.  Fear and coldness was all I felt.  I had to break away from him, and when I did I ran out of the building and most of the way down the street sobbing.  I had never done that before or since.  Truly horrible, and I almost didn’t go back in.  When I did, finally, our group stayed upstairs while the other group investigated downstairs.  I sensed a little girl in the room, and it was as if she took over my body.  I felt light and happy for the first time all night (my group said my voice changed, but I don’t know about that).  That feeling went swiftly away when I went downstairs, and it made me very sad.  For the rest of the night I was terrified of the room where the attack happened, and I could sense him in the corner…perched and waiting.

My other favorite was a little more positive. 🙂

What is your dream investigation?
Any castle in the UK that isn’t advertised as being haunted but probably is.

What is your favorite method of investigating (i.e. EVP sessions, dowsing rods, etc.)?
I let the spirits come to me if they want.  I’m a sensitive, and I just wait for them to speak or show themselves.  I never have to wait long.

Who do you look up to in the paranormal community?
Honestly, no one right now.  It’s all about the books or the TV shows.  I’m more interested in helping those being haunted and learning about what causes hauntings.  I don’t want to make any money or garner fame.

What is your advice to people who want to get involved in paranormal investigation?
Remember that a lot of what happens is most likely due to hysteria.  I’ve seen many people go nuts because one person claimed to be touched, then suddenly everyone else is being touched.  Every little noise is not caused by a ghost, and EMF meters don’t help find spirits.

What do you do outside of investigating (family, hobbies, job, etc.)?  I’m a homemaker…pretty boring. 🙂 (A note from Beth: First, being a homemaker is anything but boring, I’m sure! Second, if you’re a Firefly/Serenity fan, check out Kimber’s beautiful work at Nala Serenity.) 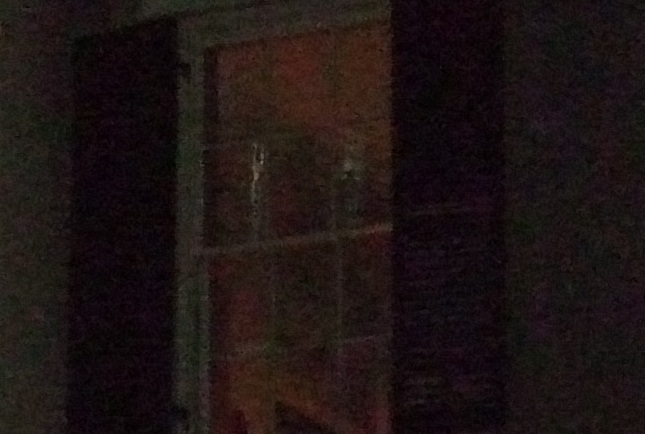