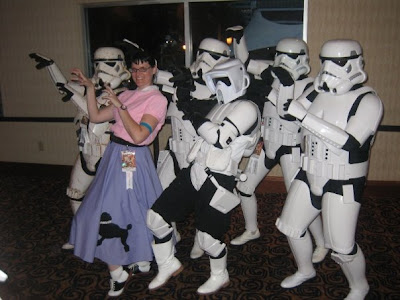 Three days have elapsed since DragonCon wrapped up for another year, and I feel like I’m still recovering. As I’m sure you can imagine, that means I had a fantastic time! (If you want proof, my pics are on my Flickr page.)

Mom came up from Savannah and we headed to the Sheraton for registration on Thursday evening. It was the smart thing to do, we thought: beat the crowds by registering early! Unfortunately, everyone else had the same plan and it took 3.5 hours for us to get our badges. On the upside, we got to meet some interesting folks in line and we didn’t have to worry about missing any panels.

We got up early Friday and arrived by 8:30 a.m. for a panel that didn’t start until 10. Considering it was the much-publicized William Shatner and Leonard Nimoy panel, we figured earlier was better. I’m not a Star Trek fan, but even I got excited at seeing those two together. You could tell they were having fun up on stage, and they reminded me so much of their characters! Shatner is loud and cocky, and Nimoy is the deadpan voice of reason. It was SUCH a great start to DragonCon 2009! (The only downside? They played Shatner of the Mount before the panel, and it has been stuck in my head ever since!)

Friday was pretty full with panels: we went to a Steampunk overview, which included a special visit from some Steampunk ghostbusters. Their costumes and props were beautiful, and they even had a Steampunk R4 unit (from Star Wars) trailing along with them. We went to the Firefly panel with Ron Glass, who played Shepherd Book, and we ended the day with the Tom Felton panel. Tom plays Draco Malfoy in the Harry Potter movies, and this was his first panel at his first-ever convention. Mom was a little star-struck, and shortly after he took the stage she whispered to me, “He sounds just like Draco Malfoy!” We cut the day short since we knew Saturday would be a whirlwind. 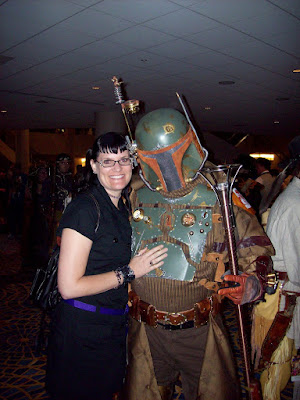 Saturday started with the parade, and this year we got there early so we had a great view. I don’t think there were as many stormtroopers as last year, but the 501st was still well-represented. And of course, there were the Mandalorian Mercs and a Boba Fett or two. We did a lot of people watching during the day, especially while in line for the Patrick Stewart panel. I had to duck out of that panel early to find my way to the rooms where the Writer’s Track was being held. It was so hidden away I felt like I’d left DragonCon behind entirely. I attended a panel about the craft of writing, and panelists included Charlaine Harris (the Sookie Stackhouse/True Blood novels), and Timothy Zahn and Kevin J. Anderson (Star Wars novels). From there it was time to go see Adam Savage from Mythbusters, who was a lot of fun and proved that he’s as much of a geek as the rest of us.

We ended Saturday night with a midnight Cruxshadows show, which didn’t disappoint. I really like their music, and their show had a lot of energy.

I slept in Sunday morning (can you blame me?) before dashing to the Decatur Book Festival to sign copies of Georgia Spirits and Specters in the Bound to be Read Books booth. After that, I ran home, put on my costume and went back to DragonCon. From 4-7, I helped teach the Thriller dance to people participating in a Guinness World Record attmept to have the most people dancing to Thriller. It was exhausting work, but totally worth it when we gathered for the attempt at 7pm and there were 903 of us packed into the room! It was so much fun and an exhilarating experience. And there were even dancing stormtroopers!! The official video isn’t up yet, but you can see the instructors/dance captains getting their Thriller on here. I’m in the white top and purple poodle skirt. For the performance I added a pink sweater- I went as the girl at the beginning of the Thriller video, when she and Michael are in a 50s horror movie.

Monday was comprised of a couple writer’s workshops. When I left the last one, DragonCon had officially ended and the place was already looking like a ghost town. It was a great time, and I’m already planning my costumes for next year!