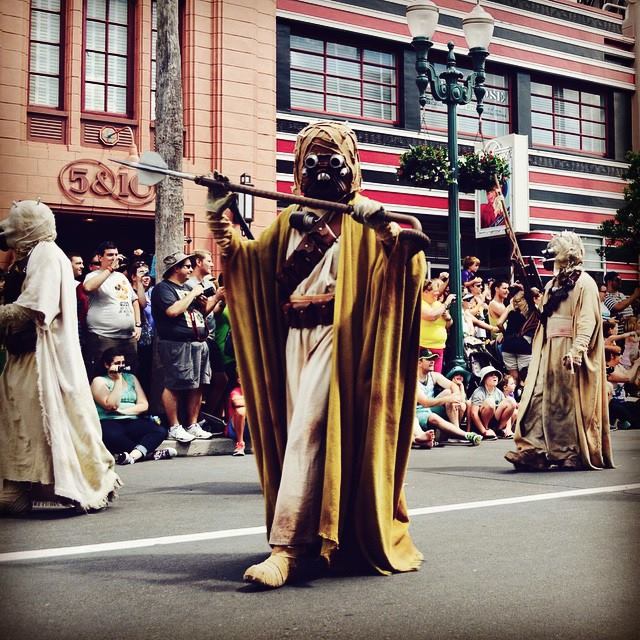 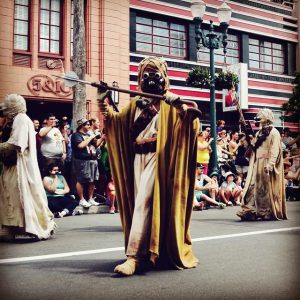 If DragonCon is my Christmas, then Star Wars Weekends is my Thanksgiving. It’s one of those annual events that I have come to look forward to with glee. This year was my third year participating in the parade at Disney’s Hollywood Studios as part of the Star Wars Weekends events.

Each year, Disney invites the 501st Legion and the Rebel Legion to participate in the parade. Star Wars Weekends spans six weekends, and I go during the third weekend, when many of the other members of the Georgia Garrison go. This year, Ed got to go with me for the first time.

We drove down on Thursday, just in time to have dinner at Boma with our friend Elyse. The food is great, and I just love going over to the Animal Kingdom Lodge because we can stroll out to the savanna before dinner to see the giraffes and zebras.

I woke up really early on Friday morning, like a kid on Christmas Day. I wore my Tusken Raider costume that day – it’s a fun one because we get to look around at the audience and brandish our gaffi sticks. Ed and I had a pretty lazy afternoon, then drove over to the Polynesian to see about getting into the new Trader Sam’s Grog Grotto. No luck – it was a 45-minute wait. We settled for a seat on the deck overlooking Bay Lake and the Magic Kingdom, and it was really a nice setting out there. I tried the Boozy Pineapple, which is basically a Dole Whip with rum in it. (I had asked for a Kungaloosh, but our server had no idea what I was talking about. Ah, well – it was worth a try. My fellow Adventurers Club fans know what I’m talking about, and it’s the drink I always get at the Trader Sam’s at the Disneyland Hotel.) After our afternoon drink we met up with Dad and Kathryn for dinner. 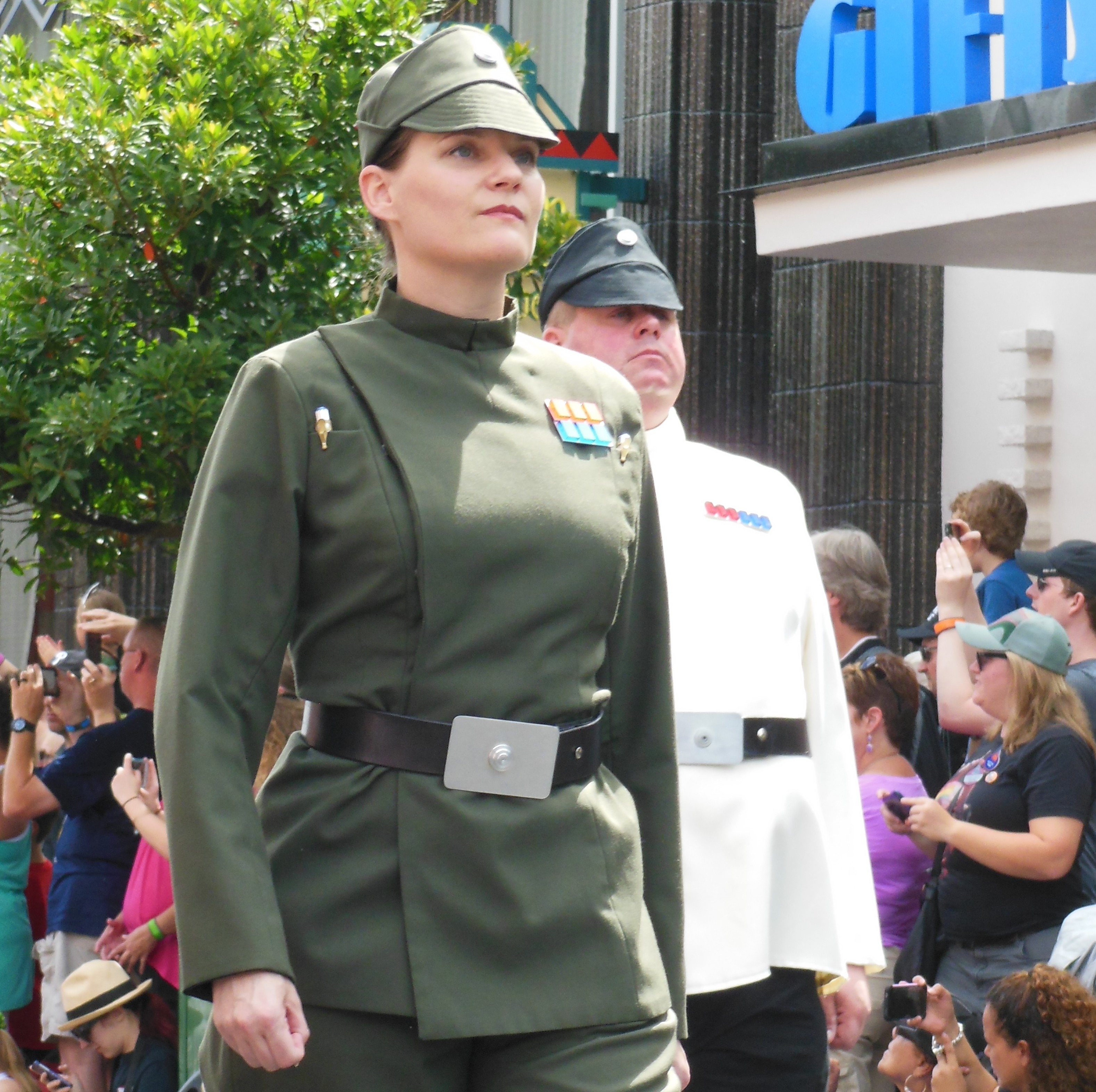 I wore my Imperial Officer costume for Saturday’s parade. Since we are acting like Imperials in a military parade, we aren’t allowed to look at anyone or smile, but I nearly started laughing twice – once when I spotted Ed and Elyse, and later when a group of kids booed us! (Don’t those kids know that we’re actually the good guys, and not those rebels?)

After a quick post-parade shower, Ed and I headed back into the park. We had a long lunch at the Brown Derby, and the timing was perfect because it poured down rain while we were in there. It was the second storm of the day: it rained just before the parade, which kept the temperatures cooler but meant that everyone waiting for the parade to start got wet. I briefly got to see my friends Bruce and Charlotte, who are annual pass-holders, then we waited 50 minutes to ride Star Tours. The wait was worth it, though, because I finally got to see the Boba Fett storyline!

Saturday night was the Georgia Garrison dinner, which this year was at Trail’s End at Fort Wilderness. So yummy, and so fun.

I was a Tusken again on Sunday, and while waiting for the parade to start, Daniel Logan (young Boba Fett in Episode II) worked his way through our ranks, saying hello. I had everything but my helmet on, but I was wearing a balaclava that covers most of my face. Daniel was shaking hands with all of the male Tuskens, and when he reached out to shake my hand, I told him I’m a girl, so I get a hug. He had no complaints to that demand. I’ve met Daniel before, but any day you get to hug a Boba Fett actor is a pretty awesome day.

When the parade ended, we hit the road to head back to Atlanta, thankfully staying ahead of a massive thunderstorm that threatened us for a long stretch of the way.

As a lifelong Star Wars and Disney World fan, getting to march in the parade every year is really a dream come true for me. It’s also a fun chance to see 501st friends from afar and meet new folks. Now the countdown to DragonCon begins!