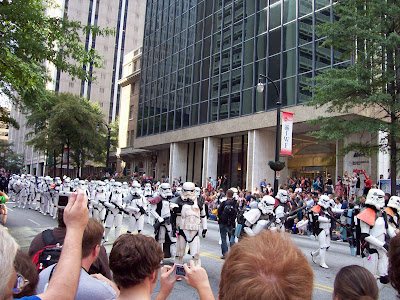 Registration for DragonCon opens tonight. If you have been anywhere near me for the past two months, you already know what DCon is, or at least you should. If you’ve not been paying attention to me, then here’s a brief rundown: DragonCon is a gathering of fans, where we pay homage to sci-fi and fantasy pursuits, whether it’s movies, books, music, TV shows or stalking cult-status celebrities. There’s a parade, there are dozens of parties, and there are thousands of people, many of whom are in costume. During DragonCon, I can expect to see dozens of Stormtroopers (pictured here in 2008’s parade), a handful of Mandalorian Mercs (Boba Fett qualifies as one), elves, hobbits, wizards, Klingons and, honestly, a bunch of costumes I don’t even recognize.

It is, needless to say, Mecca for geeks. Right here in Atlanta, no less! I am excited about going to registration tonight-never have I so looked forward to standing in a line. Tonight I will also pick up a ribbon denoting me as a participant in DragonCon Thriller: a few people have organized a mass performance of the dance from Michael Jackson’s Thriller video in the hopes of setting a world record for the most people performing the dance in one place. I have been “roaring” and “booty-bouncing” for weeks now and can’t wait. I even sewed a special costume for the performance…yes, there will be pictures.

Post-Con Depression: Its Symptoms and Treatment 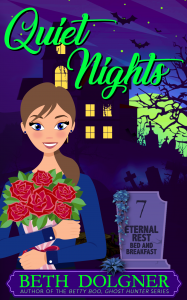