Jon and his girlfriend visited Savannah over Labor Day weekend, and here is his account of the odd photo he got:

My girlfriend and I went to Savannah for vacation over the Labor day weekend – her first time and I’ve been there a few times before. Anyway, I ran across your blog and was fascinated by the stories surrounding this house. So, we decided to walk there the next day. I took only 10 pictures hopefully coming across something abnormal. I think I did. The photo (file ending in 1637) is one similar to Terri G.’s photo in which she captured “eyes” when taking a photo of the downstairs window (to note: I didn’t realize this association to Terri G’s photo at the time I saw something in the photo I took which was hours afterwards). With so many accounts posted on your blog – and having to read it only once, this correlation dawned on me after I was showing my girlfriend your blog and going through the pictures in my camera after we returned to the hotel.
Anyway, I appended 2 other files: one before and one after this shot was taken – probably within a minute apart – as I was walking from one spot to the next. The photo I took in between is me actually being goofy and taking a picture of my girlfriend’s reflection in the window just so I can jokingly tell her that I “captured” something. However, when you look at the photo you can see the reflection of her shoulder, her purse strap, and her hair covering her face while she’s walking to the right of the picture – and these “orange streaks and dots”.

…Anyway, I can “see” 2 things – similar to Terri G’s photo, I can make an outline of a shadow: where the 2 streaks can lead up to a snout of some sort – like a lion’s head. The other thing I can see is that the 2 orange streaks are “legs” and the orange dot on the other side of the bar is a “head” – so it makes it look like a small spirit “flying away” from the reflection of Christina’s top that she was wearing that day. Likewise, it can also look like it’s being hung. The strange streaks and dots are on the left side of the window. Click on the photo for a larger version.

This is one of the more unusual photos I have seen recently. What do you think? Has Jon captured something paranormal? Comment below with your thoughts! 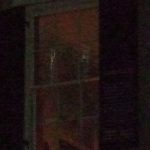 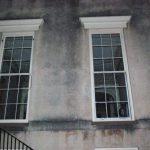