Dave C. recently wrote to me with a frightening experience he and his wife had during a ghost tour. Physical illness in response to a haunted place is not uncommon – I’m a tour guide with the Roswell Ghost Tour, and I’ve had several people feel ill at the “creepy house” that we visit.

Have you had a similar experience? Leave a comment and let us know!

“I found your website after googling 432 Abercorn during a recent trip to Savannah with my wife.  We took a ghost tour on Aug 3rd and decided to read up on this house after something unusual happened to my wife there that evening.  I’d like to point out that I’m skeptical by nature and think that most experiences can be logically explained.  Perhaps this can be too.  I certainly can’t, and won’t, say that what happened to us can be attributed to anything paranormal, but it was something that was unexpected and interesting.

My wife and I knew very little about Savannah prior to our visit and had never heard of this house or its history.  We had actually planned to visit New Orleans to celebrate my 50th birthday (Aug 3),  but switched our plans a few days before we were to depart and came to Savannah instead.  My brother was having an unexpected surgery at Memorial Hospital and we decided we should be close by during his recovery.  I booked a ghost tour a few days in advance, not knowing for sure if we would even be able to attend.  It seemed like it would be something fun and entertaining to do and would give us a break from spending time at the hospital during the day.   I didn’t tell my wife anything about the tour until I was pretty certain we could make it.

The tour met at Chippewa Square at 9:45 pm on the 3rd of August.  The group was large (I think about 30 people).  We made several stops and learned a lot of background history about Savannah.  We found the information to be interesting, entertaining, and sometimes creepy, but not necessarily all that scary.  As I said before, I’m a skeptic and think there is usually a logical explanation for most things.  When we arrived at Abercorn my wife and I were near the front of the group and stood just across the street near the curb as we listened to our guide.  After about 10 minutes my wife began to lean on me a little and said she didn’t feel good.  I asked if she needed some water.  She said no but that she felt like she was going to throw up.    I suggested we make our way toward the back of the group to see if she would feel any better.  As we started to casually walk to the back she whispered again “I don’t feel so good”.  I could tell she was getting unsteady on her feet so I held onto her as we walked a few steps toward the back.  Suddenly she went limp in my arms and I had to lower her to the ground.  She almost immediately tried to sit up on her own but had a very dazed look on her face.  I told her to sit there for a minute.  A few seconds later she was out again.  I think someone from the group announced what had happened and Tobias (our guide) asked if she needed assistance.  Another man from our group came over to help me and told Tobias he should call for an ambulance because she was incoherent.  At that point I agreed.  The man helping me suggested we pick her up and move her to a bench in the square – which we did.  Almost immediately after getting her to the bench she seemed to be fine.  She was sitting up talking and told Tobias she didn’t need any assistance.  He was on the phone with 911 at the time and told them she appeared ok and that she was not having any difficulty breathing.  He cancelled the need for an ambulance.  Tobias continued his talk at Abercorn for a few more minutes as my wife and I sat on the bench next to the man who helped us.  She attributed her episode to the heat and kept asking me, “it must have been the heat, right?”.   I asked her if she had been standing with her knees locked for a long time.  She said no, that she just suddenly began to feel weird and nauseous and was trying to look around for a trash can where she might sneak off and throw up.  She said that everything started slanting sideways just before she collapsed.  By the way, she never did throw up.  To those of you wondering, yes she did drink a beer (a Blue Moon to be exact) from the Six Pence Pub prior to the tour.  No, we had not been drinking or partying all day, and she has never fainted or otherwise lost consciousness prior to this event.

As the group left Abercorn my wife said she wanted to stay with the group and finish the tour.  She didn’t have any more issues the rest of the evening.  I did notice that her hands felt uncharacteristically hot later that evening.  Normally she is always cold.  Anyway, we laughed about the event later and made jokes about it being the hag – (a creature or entity that was mentioned on the tour).

Sooo…  during the early evening of Aug 4th (the day after our tour) my wife decided she wanted to go back and see the Abercorn house again.  I think she wanted to prove to herself that she wasn’t scared, or that nothing would happen this time.  She wanted to see where she passed out and have me describe to her exactly where we were and what happened.  We walked from a few blocks away and found the square deserted.  It was about 8:30 pm.  I took a few pictures of her where she first went down and a few more pictures in rapid succession of the house.  As we were standing there talking a strange cool wind hit us from the east.  It only lasted a few seconds but we both looked at each other and said that was kind of weird.  I think I made a joke again about it being the hag.  When we got back to the hotel later that evening I called her over to look at the pictures I had downloaded to my laptop.  A couple of dim orbs showed up around her in one, but I think those are mostly attributed to dust or moisture in the air, or on the lens.  Overall the pictures were just pictures – except one.  It’s a picture of the house and appears to show an orb or blob (near the ceiling of the upstairs balcony).  If you zoom in on it, the orb appears to show a woman’s face (almost like it’s a portrait)-at least that’s what I see.  One person saw what appears to be a monkey’s face and yet another person saw a man with a beard.  Most people see a woman though.  The pictures I took seconds before and after this picture show nothing.  It could just be a trick of the light or a reflection of dust.  I have not altered the photo or edited it in any way.  The original photo is still on my camera card as well.  Anyway, I’m not sure what to think but thought I would post our experience here for others to read.”

The orb that appears to have a face in it is in the upstairs balcony on the right of the house. Click the photo for a larger version. 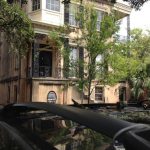